Afu (Japanese: あふぅ, Afu) is a Puchidol in the Puchimasu! series and is based on 765 Production idol Miki Hoshii. She is voiced by Akiko Hasegawa.

A cheeky Puchidol who loves eating onigiri. Her hair dramatically changes color and style in summer, and having high affections towards men and boyish girls like Makoto. 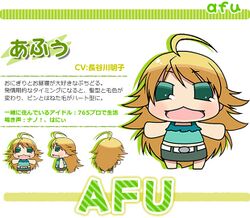 Afu is the second puchidol introduced, just a few seconds after Yukipo, the pair being the only two puchidols resident in the Project 765 office over the long term (the residences of Chicchan and PiyoPiyo are not very clear in the first season.) Afu loves onigiri and is a heavy sleeper to the point of onigiri being the only thing that can reliably wake her up; she and Miki were hardly bothered by a structural awning collapse just outside (ONA-10). The only other recorded occasion where she woke up to sound was when Chihyaa caught her napping at the office and Chihyaa can kick out serious decibels (2x36). She has a summer morph where her hair is brown (Miki's natural color) and shorter, and her ahoge becomes kinked to resemble the top of a heart symbol. She changes between normal and summer morph depending on weather, rather than climate, leading to several changes back and forth per season (normal in 2x60, summer morph in 2x63, normal in 2x65.) It may be that whether the air conditioning is working at the office can make the difference (1x36).

Afu appears as an accessory in this game. She is available by buying the entirety of Catalog 03 DLC. She raises the Visual stat and can be worn on the Head.