An easily-frightened Puchidol who summons various animals whenever she cries, even when shedding tears of happiness (2x49). 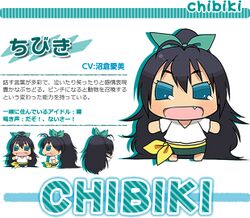 Discovered by Takane with the help of Koami and Komami, she was presented to Hibiki, who had to rescue her from the mouth of a fish before being teleported by Takane (with Miurasan) to Brazil to be left stranded there (1x39). After discovering Iori, securing her means to return to Japan, Chibiki agrees to live with Hibiki, a tearful moment for the latter, who had been trying to adopt a puchidol for months (2x40). Chibiki's "Anmayoo!" cry of desperation is first (and so far, only) heard following the springing back of her stretched hair tangled with Yayo's near the beginning of that expensive adventure (1x51-53). Her tendency to summon a giant chicken to the project office has destroyed the office more often than any other puchidol's power (once in 1x53 and twice in 2x49, vs. Harukasan's once in 1x13-15 and once in 2x51, and Io's once in 2x6.) Not all of Chibiki's pets are so destructive, for example, her friendly bear entertained her, Io and Yayo at a spa (2x10) and wasn't much help during Golden Week 2014 (2x24).

Chibiki appears as an accessory in this game. She is available by buying the entirety of Catalog 12 DLC. She raises the Dance stat and can be worn on the Head.