She is voiced by Naomi Wakabayashi.

In Season 1 Episode 23, Chicchan suddenly appears to be on Project 765 administrative duties. Like Ritsuko, she is a busy worker and is often ordering the other Puchidols around. She is highly intelligent, able to do complicated mathematical calculations perfectly, and produce many kinds of machines such as robots and helicopters by using sticks and stones. Chicchan is awkward around Producer, often to the point of being completely incapacitated. With everyone else except Ritsuko, she commands such respect that she does disciplinary lectures. 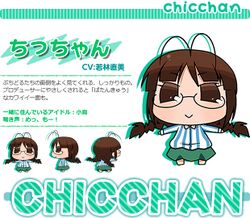 The discovery circumstances of Chicchan are totally unknown, as Makoto, following a typical grand entrance, finds her typing at a laptop and interacting with Kotori as though she had been there for weeks (1x22). It seems most likely that she was recently found by Kotori during a morning commute in much the same way Piyopiyo was encountered by the Producer.

She couldn't have been there long because Ritsuko didn't know she was there until Makoto brought it up. For a pair of alpha females, Ritsuko and Chicchan hit it off extremely well, and the episode title not-so-subtly implies that they have a telepathic connection. For Haruka Amami's birthday on April 3, 2014, Chicchan built and operated a human-sized mecha to mimic Haruka and exaggerate her foibles, such as tripping over her feet, doing the splits, and repeating her name. (OC: It seems like the writers were dissatisfied with Harukasan's level of caricature.)

Everyone else pretended like the mecha was the real Haruka and ignored her until she was just about ready to lose it (2x3). For the third event of Golden Week 2014, Chicchan led the team seeking the golden medallion at the top of a tall, narrow spire. Koami gathered stone, Komami gathered wood, Chicchan built a helicopter, Yayo found oil, Yukipo dug for it, and they used the wellhead pressure to launch the helicopter to the top of the spire (2x26). Hey, it's a cartoon!

Chicchan appears as a Head accessory in THE iDOLM@STER SP and is available by buying the entirety of the Catalog 10 DLC. She can be equipped to raise the Vocal stat of a single idol.