Welcome to the new home of the project-imas wiki!

Harukasan (Japanese: はるかさん, Harukasan) is a Puchidol in the Puchimasu! series and is based on 765 Production idol Haruka Amami. She is voiced by Eriko Nakamura.

She was found by Iori in a shrine on the remote island. (Season 1, Episode 11)

She is similar to Gremlins in that she multiplies when coming into contact with water, hates bright sunlight, and turns vicious when eating snacks after midnight. She also changes into a larger version often used as transport when in a large body of water. 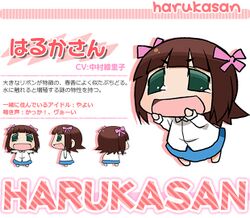 Harukasan was discovered by Iori in a shrine on a deserted island during a rain squall. Harukasan greeted her with the standard puchidol show of affection: hugging her face, which caused the unaccustomed Iori to flee into the rain with Harukasan chasing her, rapidly multiplying into a heap of at least several hundred Harukasan until she was rescued by Yayoi just after the rain cleared. Yayoi saves one surviving/recombined Harukasan to take back to the Project 765 office. (It is implied, but not confirmed, that Yayoi slaughtered the replicants.) Within two hours of arriving at the Project 765 office, Haruka Amami names her, and promptly trips over her feet, dropping a glass of water on Harukasan and thus destroying the entire Project 765 office. Ritsuko loses it on finding Producer's gift plate broken, recombining the Harukasan swarm with a pair of loud commands, concluding the adventures of 1x11-15.

Despite some scientific investigation, Harukasan's response to water is somewhat unpredictable: she doesn't multiply in warm enough water, the transition temperature appears to be 34C (2x51). She has been observed to grow to the size of a boat, sometimes in water, and sometimes out of water (1x56, 1x57, 2x1.) One time, when taken out into the rain after apparently desiring it, she shrank to about bottle cap size, but could still multiply with tap water (2x62). She does not walk normally, instead hopping along on her seat or, in large form, swimming. She rarely closes her mouth, even when sleeping, except in large form (exception in 2x35). If fed after midnight, she takes on a dark form that can be corrected by removing and refastening her hair ribbons (2x52).

Harukasan appears as an accessory in this game. She is available by buying the entirety of Catalog 01 DLC. She raises the Vocal stat and can be worn on the Head.