Kotori Otonashi (Japanese: 音無小鳥, Otonashi Kotori) is an office clerk from 765 Production who was introduced on the website for the arcade game. She is the daughter of a former idol, Kotomi Otonashi.

She is voiced by Juri Takita (Japanese: 滝田樹里 , Takita Juri).

The secretary of 765 Production, Kotori is open-minded and smart, but also sometimes shy.

Due to her position in the agency, at slow hours she can often doze off or start to daydream about outrageous things; she has a fujoshi side as well, as evidenced in THE IDOLM@STER MOVIE. She also spends much of her free time during workdays browsing 2chan, and because of this, she is often thought of as being a pervert. 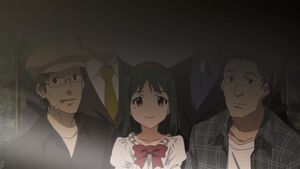 A picture from THE iDOLM@STER anime. The character in the middle was later confirmed to be Kotori's mother.

Kotori makes most of her appearances in the dramas, and as an announcer of in-game events and real world events such as character birthdays, seasonal meetings, iM@S live events, and staff updates. Her first appearance was on THE iDOLM@STER Arcade website.

While her past has yet to be officially elaborated on, Kotori does canonically have some connection to either being a former idol herself or being closely related to a former idol. In THE iDOLM@STER anime, a bit of light is shed in Episode 21 about this matter. Junichirou, both in the anime and the games, has mentioned producing an idol in the past. While this fact was usually used in a reference to Wonder Momo, the anime takes a different route by showing the picture displayed to the right. In it, Takagi, Kuroi, and their respective reporters appear with an idol they produced together. While she does look similar to Kotori, the mole on her face is under her eyes, not above her chin and this woman's hair is grown out. According to an interview in the March 2012 issue of Megami magazine, the woman in the picture is Kotori's mother—Kotomi Otonashi. Asayake wa Koganeiro THE iDOLM@STER manga expands further on this backstory.

THE iDOLM@STER SP takes a different approach. During the extra scene available upon producing all nine idols, it is noted that Takagi produced an idol whose image songs were Sora and Hana. While this could mean he produced Kotori, it does not mean that Kotori is the only idol who had those image songs (as in the case of Ai and Mai Hidaka).

Kotori has brown eyes and short green hair which goes down her neck. She wears a yellow hairband, a white dress-shirt and black and green vest and a large yellow ribbon bowtie, a black skirt with black nylon stockings, and white high-heel shoes. Prior to 2nd Vision, her ribbon bowtie was purple. In some games, she wears a yellow microphone headset which also doubles as a hairband. The facial feature that sets her apart from the other idols in the game is the mole beauty mark on her right cheek—which is often covered up by her microphone piece, if applicable.

Kotori made her character debut on the arcade game's website. Originally a staff-created character, she posted information on events and DLC packs. In 2010, when the arcade game was revealed to be taken offline, a promotional event started where she and several other characters were added into the game as rival NPC's. Because she had no character model, she was represented by a unit made up of Yayoi Takatsuki, Ritsuko Akizuki and Yukiho Hagiwara.

THE iDOLM@STER Live for You!

Kotori appears in Live For You!'s Idol Drama 10 with a full 3D character model, although her animations are reused from every other idol. Buying this drama also allows the player access to her 765 Uniform as a stage costume for the idols.

Kotori's role is expanded on as to help the Producer arrange meetings and dates with other idol personnel. She also appears with a full character model in two Idol Dramas that she shares with Ritsuko Akizuki and Miki Hoshii.

Kotori continues to be an office clerk at 765 Production. Kotori's mole is a DLC fashion accessory in THE iDOLM@STER 2. She also appears on the DLC pages of the official website. Kotori's outfit has also been given slight modifications, complete with a lighter green vest and a yellow bow tie.

THE iDOLM@STER LIVE in SLOT!

Although Kotori does not make a physical appearance in the actual game, her voice can be heard announcing during in game LIVEs.

Kotori can be seen on the tutorial dialogue boxes, with words "Kotori Notes" on the top-right corner. She is also seen in the in-game anime and a few Music Clips.

Kotori's image song "Sora" is free to download upon purchasing the last six DLC packs. The video for the song features clips of Kotori's appearances from the anime.

Additionally, when a "Rare Fes" occurs, where winning raises your level of affection, you can see Kotori in a yellow-colored uniform, something that was never seen before. For some reason, she also dresses up as a white butterfly on the day of the Spring Equinox and gives "butterbur tempura". She also shows off a variety of other costumes not seen in other series, such as a kimono and a shrine maiden.

She has a few level-up and skill-up cards. Furthermore, in 2014, an SR of her was released as an April Fool's joke, which is not available. In May 2016, the Next Prologue Arc began, with another SR of her appearing as a potential skill-up.

Kotori continues to offer support for the producer when needed. She also appears with a full 3D character model during some of the interval cutscenes.[1]

Kotori serves as the guide alongside the secretary of the 765 theater Misaki Aoba. Her first appearance in the game was in a commu from an event. She and the president initially had no 3D models, and there was only a picture of them in the upper left corner of the speech balloon.

She received a 3D model in an April Fools' Day commu in 2018. In the epilogue, she said she was going to try the "example thing", but she didn't say what it was at first. It seems that she and Misaki will be taking turns handling the login bonus from now on.

In Theater Days, she normally wears the same uniform as Misaki's, with a few parts, such as the Fisher Days minigame, depicting her in the usual uniform she wore in the other games.

Kotori provides support for Project LUMINOUS and the producer.

In THE iDOLM@STER anime, Kotori is an office clerk much like in the video games. Due to the lack of employees in 765 Production, she is involved in other jobs besides office work, such as selling CDs. Her home is also shown in the anime. At home, she often watches TV programs featuring 765 Production's idols.

In episode 21, the second half of the story, it was revealed that she sometimes performed as a singer at a piano bar. At the same time, a picture of a woman who looks like her was shown in a picture. (The woman is revealed to be Kotori's mother, but the relationship between the people in the picture is still unknown.) In the ending of the same episode, Kotori's solo song Sora is played, depicting a day in her life at 765 Production.

During the events of the movie, Kotori does not attend the training camp, but has a drinking party with President Takagi and reporter Zenzawa, where she unleashes her BL-like fantasies, and is as free as ever. On the other hand, she is also sad that the producer is going abroad to Hollywood.

THE iDOLM@STER 2 The world is all one!!

This manga acts as a prequel to the anime and tells the story of a high-school aged Kotori before she was taken in into 765 Production.