Miurasan (Japanese: みうらさん, Miurasan) is a Puchidol in the Puchimasu! series and is based on 765 Production idol Azusa Miura. She is voiced by Chiaki Takahashi.

A ditzy puchidol who has the habit of teleporting herself, and anyone near her, to the location or object being thought of by the nearest person or puchidol. She is usually seen with her hands on her cheeks as though she's holding her head from floating away.

She was discovered by Iori and Yayoi inside the Pyramid. (Season 1, Episode 32) 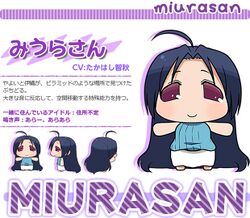 It appears the first thing Miurasan did on arriving in Japan was explain her teleportation ability to Yayoi (who, along with Hibiki, can understand puchidol language.) Yayoi tours her around the office while Ritsuko and Iori discuss how to find her, after which, she escapes the building; Haruka wets Harukasan to help with the search, adding several dozen (largely unskilled) members to the search. Miurasan meets up with Asuza outside, and they apparently tour the world looking for Miurasan's home, ending up back in the African settlement where Chihya appeared, and discovering Miki and Io there. After their flight home is delayed by weather, Miurasan, with the help of Asuza, teleports the whole lot back to the Project 765 office (1x33-35). When Chihaya left a script at home, Miurasan was instrumental in transporting it and the hastily assembled team of puchidols Chihyaa, Takanya, and Yayo to her location (1x61-63). About a year after being discovered, Miurasan gained the ability to activate her teleportation with her own clap, which was first used to help Chihyaa "rescue" Chihaya from Takane and Asuza, who had bagged and dragged her off to a hot spring spa along with Iori (2x12). Miurasan led the bronze team at Golden Week 2014, escaping with Takanya, Io, Chibiki, and the bronze medallion (2x24). She later imports some beer (probably illegally) for Kotori and Producer (2x45; appears to be a bottle episode.) On 2014 May 8, she led an Antarctic expedition with Yukipo and Chihyaa to see some penguins and sealions on a whim (2x34). When left to attend a phone, she will teleport to the caller's location when the phone rings (2x57).

Miurasan appears as an accessory in this game. She is available by buying the entirety of Catalog 07 DLC. She raises the Visual stat and can be worn on the Head.