Piyopiyo (Japanese: ぴよぴよ, Piyopiyo) is a Puchidol from the Puchimasu! series and is based on 765 Production's secretary, Kotori Otonashi. She is voiced by Juri Takita. 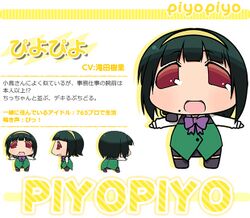 A puchidol that resembles Kotori Otonashi and for some reason is better at Kotori at her own job. Combined with Chicchan, the two are capable of almost anything.

Piyopiyo is introduced as a Puchidol looking for the 765 Production office although it is not very clear exactly where she received knowledge about 765 Production. Producer stumbles upon her while she is looking for the office noticing that she resembles Afu. While the Producer offers to escort Piyopiyo to the office, he fails to arrive at their destination as he is suddenly taken into custody by the police who mistaken him as a suspicious predator. Piyopiyo would eventually arrive to the office on her own, but not without being ensnared by a trap setup by Hibiki who hoped to catch a Puchidol for herself. Unfortunately for Hibiki, Kotori was quick to claim ownership of Piyopiyo in the end. Chihaya also ends up giving Piyopiyo her name randomly without input from everyone else, but everyone accepted her new name anyways. Eventually she becomes a helper for the rapidly growing 765 Production as a senior figure to the other Puchidols and a hardworking secretary. The green bag she brought along with her to the 765 Production office would contain another puchidol which would later be revealed as Makochii.

The events of Piyopiyo's discovery play out similarly as the manga. However, the part where Piyopiyo is caught in Hibiki's trap is omitted entirely. Because of the limited screentime of the Puchimasu anime along with content exclusive to the animated series, a lot of Piyopiyo's characterization and traits are not fully explained.

Piyopiyo is shown to have the following abilities and traits:

Piyopiyo appears as an accessory in this game. Unlike other Puchidols who are available by buying the entirety of a DLC catalog, she is simply a purchased accessory. She raises the Vocal stat and can be worn on the Head slot.