Welcome to the new home of the project-imas wiki!
To editors: Create an account, confirm your email, wait 10 minutes before making an edit, and welcome back!
If you previously had a user page or user talk page, you can find them at Legacy User:Yournamehere and Legacy User talk:Yournamehere.

Ritsuko Akizuki (秋月律子, Akizuki Ritsuko) is an idol introduced in the arcade version of THE iDOLM@STER.

To all staff and members reading this resumé: To be a successful idol, what do you think it takes? Looks? Your skill in singing? Yes, those traits are indeed very important to be an idol, but I believe Knowledge is important as well. Yes, Knowledge. Working together, I'd like to see what kind of Knowledge you have.

"My name is Ritsuko Akizuki. Project LUMINOUS, looks like it was a stimulating experience for me. Whatever the activities are they, I'll always looking for the skills. Please take care of me, Producer-dono♪"

"I'm Ritsuko Akizuki. If we're going to do this right, then I'm going to aim for the top as planned."

Cool and smart, Ritsuko Akizuki worked at the 765 Production office as an intern after having graduating from high school, but after hearing that the agency is low on budget and has too few idols, she decided to debut herself.

Loving to work and managing things, she is the perfect type of business woman. Always keeping herself busy, even on her days off she finds something to do at the 765 offices, such as paperwork. On rare occasions, she will even act as a producer herself. Not really looking anything like idol material, and even admitting this herself, she still works very hard as an idol. Her future dream is to become a manager of a business corporation one day.

Ritsuko also has a serious side to her, and if she feels that anyone is slowing her down in her work, she will scold them or brush them aside, occasionally correcting even the producer if he isn't doing his job right.

Ritsuko's family consists of herself, her mother, and her father. Her parents share the same trait as Ritsuko: being business-like and hardworking. They own a shop in the city.

Ritsuko has shoulder-length brown hair, which she always keeps in one of these hair styles depending on the appearance: one or two braids, or a spiky high-bun. In THE iDOLM@STER and THE iDOLM@STER Dearly Stars, she wears a white shirt with blue stripes and a dark green skirt with a light brown belt. Her alternative outfit is a plaid dark green jumper with a blue shirt under it and black trousers.

In THE iDOLM@STER Dearly Stars, Ritsuko is Ryo Akizuki's cousin, and the one who helps him enter the idols' world. She also introduces Ryo to Makoto Kikuchi, who would become help him reach his goals. She can also train the 876 PRO idols the choreography panels for "Mahou o Kakete!".

Before the events of THE iDOLM@STER 2, Ritsuko was an idol and the personnel shortage in the agency forced her to be a clerk as well. She quit being an idol because she was aiming to be a producer in the first place, and saw her job as an idol as a stepping stone. At this point, she became the official producer of the 765 Production unit, Ryuuguu Komachi. While having this job, she denies ever wanting to be an idol and constantly says that she wasn't suited for the job. However, she often slips up and admits that she misses being an idol, particularly when she goes onstage with other idols or dances when egged on.[1]

Ritsuko has a playable route in the PS3 release of the game, where the Producer helps her manage Ryuuguu Komachi and makes a stage appearance with the help of Mami Futami. Ritsuko now wears her hair in a spiky high-bun and her outfit is a business suit with a green shirt, more fitting with her new position as Producer.

In Melody of Serenity, Ritsuko appears as a member of the unit Proro along with Yukiho and Haruka. She becomes a line of communication for feelings with Chihaya's producer and defuses their initial dislike for each other. Ritsuko and Haruka also team up together to stop Yukiho's antics of digging holes and even manage to take her shovel from her. The trio constantly supports Chihaya through out the novel and help her make a successful idol debut.

Ritsuko then stars in Heart-throbbing Summer Days, as the novel explains how she became part of the unit Proro. After failing to become a manager, she joins 765 Prodution as an intern. She tries to produce Haruka, but winds up being forced into becoming an idol herself. Ritsuko, Haruka and Yukiho are then made to train several days at a boardinghouse as rivals. They each learn a debut song and learn about the harshness of dance lessons and cooking. When the girls finally debut, they realize their debut songs all are simply different harmonies of the same song. The girls debut as Proro and are amazed that all three of them became great idols.

THE iDOLM@STER Live for You! OVA

Ritsuko appears along with the other 765 Production idols leaving the office after preparing for a fan appreciation event. She is later seen in the dressing room of the event informing Haruka, Chihaya and Miki (who were lost on the other side of Japan) about the Producer searching for them. She explains the girls can make it to the concert if they make it to the bullet train station. After Iori picks the trio up in a helicopter, Ritsuko is seen with the other 765 idols as they go to the event.

Ritsuko becomes D-Love's producer after Miki's producer disbanded the unit Namco Angel. She also steps in as Melt 'Chu Up!'s manager. The unit Devil Angel cheats their way into forcing both of Ritsuko's units to lose to Tougouji Production. Because of trouble promoting her units caused by the agency, the Producer decides to disband all of the 765 units and put all of the idols into an ALLSTARS unit. Ritsuko is shown performing relations alongside the other 765 Production idols and with THE iDOL@STER GRAND PRIX.

Ritsuko isn't seen in the manga until the third volume when she moves into the 765 dorm, as well as Makoto, Ami, Mami and Azusa. She joins 765 Production and helps both manage and promote the idols of the agency while becoming one herself. She literally solves most the problems in the agency single handedly and ends 961 Production's take over of Miki Hoshii. She is seen proving to be a good dancer, great at quiz show appearances, and even explaining business to her "producer", Yuutarou.

The mangaka himself wrote that Ritsuko wasn't in the first volumes simply because she would have easily solved all of the problems that Yuutarou Takagi was faced with.

At the start of the anime, she has already quit being an idol and appears as an idol producer. In episode 6, there is a description of Ritsuko personally choosing the unit Ryuuguu Komachi to be formed, and it can also be confirmed that she has a car license. (However, there is even a description of her driving a medium-sized car, which according to the Road Traffic Law, only people over 20 years old are allowed to drive.)

She has many conversations with the members of Ryuuguu Komachi, and there are many scenes where she teaches Miki how to be polite.

She still has a desire to work as an idol, but she thinks that working both as a producer and an idol is half-baked, and she had no intention of going on stage. However, in episode 18, Azusa Miura was absent due to the mumps, so she appeared in the secret live in her place, much to the delight of her fans at the time.

In episode 25, she was introduced by Azusa as a "producer and idol" without any warning, and she was forced to appear as a surprise at the live, and half reluctantly stood on stage with the 765 Production idols.

THE iDOLM@STER 2: The world is all one!!

Ritsuko with her hair down. 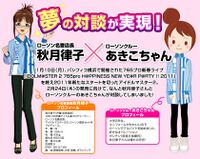