Ryo Akizuki (Japanese: 秋月涼, Akizuki Ryo) is a male idol and the cousin of a 765 Production idol, Ritsuko Akizuki.

He is a former idol from 876 Production, who served as a crossdresser idol in THE iDOLM@STER Dearly Stars's storyline. In THE iDOLM@STER SideM, he makes a return appearance as a 315 Production idol, meaning that he defected to that agency. This is because SideM takes place after the story of Dearly Stars.

He is a member of the unit F-LAGS along with Daigo Kabuto and Kazuki Tsukumo. Before Ryo defected to 315 Production, he was part of the unit Dearly Stars along with Ai Hidaka and Eri Mizutani.

He is voiced by Yuko Sanpei (Japanese: 三瓶由布子, Sanpei Yuko).

-The boy who fulfilled his dream and aims to become a cool, handsome idol!-
"I'm a boy, I'm a boy... This is... the first step towards my dream!"

Reasons for Becoming an Idol: Because I want to be cool. That hasn't changed since I made my debut.

Personal Motto: "Dream" and "Don't worry about what others think"

Comments for the Future: Someone who’s loved by men and women alike: That’s the kind of cool idol I’m aiming to be! I believe that by chasing my dreams, I can encourage those who have lost sight of their own.

Comments about Unit Members: Daigo-kun’s a pretty cheerful and funny guy, don’t you think? He reminds me a bit of some other friends I’ve had before. Kazuki-san, he cares for us quite a lot. I’m hoping to become great friends with these two from here on out.

-From female idol to male idol!-
"This... is the first step towards my dream!"

"I'm Ryo Akizuki. I used to be a female idol, but now I'm trying to aim to the top as a male idol!"

Ryo is the cousin of Ritsuko Akizuki, who has been a recurring character in the series. He is calm, soft, and all-around a cool and collected boy. In many ways, he is the opposite of his unnecessarily-harsh cousin. He carries an air of femininity, due to which he tends to be asked out by male classmates.

Deeply worried by his feminine image and hoping to become more popular with the girls, Ryo has been considering becoming an idol for a long time, but when he visits the 765 Production office to discuss this idea with his cousin Ritsuko, she appears skeptical towards his plans. However, she is prepared to introduce him to Manami Okamoto, a manager at 876 Production. Manami, in deep trouble because of an 876 idol having become unable to perform at a live that is about to take place, is glad to accept Ryo as a substitute. Much to his disturbance, he has to go on stage dressed as a girl.

Ritsuko, noticing Ryo's charming on-stage appearance, decides that he should make his debut with 765 Production after all. Ryo immediately refuses because Ritsuko wants him to debut as a girl idol, and he does not like the idea of being toyed with by his cousin. He chooses to join 876 Production instead so he will be able to debut in his own way.

However, when he is officially being taken in by 876 Production, president Ishikawa decides that Ryo will continue to perform as a female idol for the time being. His fans and his fellow 876 idols Ai Hidaka and Eri Mizutani are not aware that Ryo is actually male.

Shortly afterwards, Ryo is asked to join an audition in which he will face Ai and Eri to decide which one of them will be allowed to make a stage appearance in a unique TV show. Ryo feels that he is at a disadvantage as both of his rivals have an experienced mentor by their sides to lend them advice. Ryo's cousin Ritsuko, however, is too busy to help him out. Instead, she introduces him to Makoto Kikuchi, a popular and successful 765 Production idol. Ryo soon develops a strong friendship with Makoto. Another 765 idol, Hibiki Ganaha was able to see through Ryo's disguise as a female in a split second due to his makeup. She then called him pretty and promised to keep his secret.

Later in the game, he also befriends his rival at the time Yumeko Sakurai. After revealing that he is actually a boy, Yumeko has since developed a crush on him.

Ryo makes his first HD appearance in the PlayStation 3 version of THE iDOLM@STER 2, where he is downloadable in this game's ninth DLC catalog as an in-story rival and for use during S4U! mode. His exclusive songs to perform are "Dazzling World" and "Kiramekirari". His appearance has not changed in design since this update.

Ryo also appeared in Volume 9 of THE iDOLM@STER Gravure For You! series, wearing the "Sailor Swimsuit" costume and "Good Night Pajama" costume, the latter of which is only available by playing wirelessly with the PS Vita. He sings the BGM music "Dazzling World", "Kiramekirari", and "HELLO!!" in these separate modes. Ryo uses the same model as his iDOLM@STER 2 appearance. He has an introduction video featured in Volume 9.

In THE iDOLM@STER SHINY FESTA, Ryo Akizuki appears as a rival in the STAR OF FESTA mode for Honey Sound, Groovy Tune, and Funky Note. He is an A rank rival who can give his Name Card to the player while in the HARD difficulty. Obtaining his Name Card adds 40 points to the player's score after their performance. 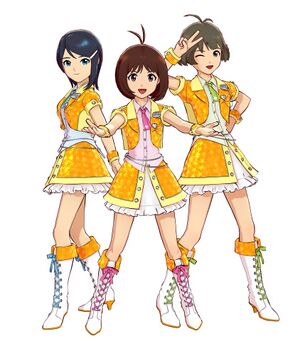 Ryo, alongside Eri and Ai, makes a cameo appearance in a few cards for a basketball event against Mirai Kasuga, Tsubasa Ibuki, and Tamaki Ogami.

Ryo makes a guest appearance in the tenth mini DLC album titled Ritsuko friends "Wisdom", in which he performs his song "Dazzling World".

Initially, Ryo is the Rank Up Festival boss for the D1 rank, where he displays his skill, ダズリングカウンター (Dazzling Counter), which allows him to burst counter and increase his own interest rate while doing so. He is only available to be seen while he burst appeals, which displays him performing the song "Dazzling World" in his 876PRO COSMIC RYO costume. Unfortunately, he is unable to be outside of the short time from the burst appeal.

However, he debuted in the unit Dearly Stars alongside his fellow 876 Production idols: Eri Mizutani and Ai Hidaka. Reprising a performance similar to his iDOLM@STER 2 appearance, his unit displays the song "HELLO!!".

While not appearing in the game initially, Ryo was added on April 30, 2015 as a part of the unit F-LAGS alongside Daigo Kabuto and Kazuki Tsukumo. He enters the game as a Mental type idol.

The events of his Good Ending in Dearly Stars are followed up in this continuity; he revealed himself as a boy and began openly working as a male idol, but he was able to keep some fans. To his relief, he was able to present himself as how he'd originally wished to. Daigo and Kazuki, his future group-mates, were inspired by the courage it took to confess.

He is still in contact with his fellow former Dearly Stars members, as evidenced by some of his dialogue and their being featured on his Candid Shot card.

Ryo Akizuki cameos as part of the unit Dearly Stars, along with Ai Hidaka and Eri Mizutani, as a possible rival the player can face.

Ryo returns yet again in THE iDOLM@STER SideM GROWING STARS as one of the idols available in the game.

Ryo, along with the rest of Dearly Stars, are shown here as established idols. They make a few cameos throughout the series most notably in the industry-wide sports day event featured in episode 10.

Although Ryo, Ai, and Eri do not appear directly in the movie, their idol activities can be seen on posters and advertisements in the movie.

Ryo makes a short cameo during the third episode, but he is not affiliated with 315 Production at the time since it was a fledgling company, and he is still a member of Dearly Stars—which means he is still a female idol in 876 Production. He runs past Tsubasa Kashiwagi in the hallway and only makes simple courtesy before attending to other matters.

Ryo makes a cameo appearance in Volume 2 of THE iDOLM@STER Break! as an audience member during a 765 PRO LIVE.

Ryo is the main protagonist of this manga. It is a retelling of his route from Dearly Stars.