Fundamentally similar to THE iDOLM@STER SHINY FESTA (and to an extent, Love Live! School Idol Festival gameplay-wise), this is a rhythm game that revolves around tapping notes of the idols in the rhythm of the background song. 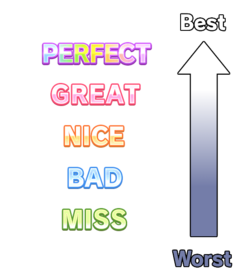 The five possible judgments in the game, sorted from best to worst.

At the start of a song, the game starts with the unit life at 100%, score at 0, and combo at 0. During gameplay, there will be different kinds of notes appearing from the top of the screen to show how each of them must be tapped. The methods of tapping them include simply tapping the notes, holding down the notes, tapping two notes simultaneously, flicking notes in a certain direction (PRO, MASTER, MASTER+, WITCH, GRAND, and SMART only), and sliding notes to a certain direction (MASTER+, WITCH, GRAND, and SMART only).

The player will get a note judgment based on the accuracy of taps and flicks; these are PERFECT, GREAT, NICE, BAD, and MISS (from best to worst). Getting a PERFECT or a GREAT will increase the current combo by 1, while NICE, BAD, and MISS will reset the current combo to 0 (BAD and MISS will also decrease life). If the life bar reaches 0%, the song ends in a failure. If the player plays through the end of a song, and when the life bar is not completely depleted, the song is cleared.

After clearing a song, a results screen appears, showing the player's statistics such as their maximum combo, number of tap ratings, and score. The player will also get rewards based on their score and song level.

Auto Live is available with an Auto Live ticket that is replenished daily (10 tickets per day, 5 additional tickets purchasable with coins, maximum 15 or 20 if paid Cinderella Pass is used), with caveats: players will be given lesser rewards, and Clears/Combos/Scores/PRPs won't count if Auto Live is used. Rewards will be multiplied if multiple auto tickets are used. Auto Live play on MASTER+ (if Extra Live ticket mode is toggled) or WITCH charts consumes Extra Live ticket instead.

The ACCIDENT judgment, which is a result of tapping damage notes, is exclusive to WITCH mode.

There are three rhythm game types (WIDE, GRAND, and SMART), with five different rhythm game modes in this game:

This is the ongoing list of playable songs in the game.

In the old song selection UI, the song list is divided into four tabs: regular tab, limited tab, event tab, and MASTER+ tab. The regular tab consists of songs that are playable every day, while the limited tab consists of jewelries! songs and an early-rewarded event song. Meanwhile, the event tab only contains one song and that is an in-progress token event song. Finally, the MASTER + tab is a separate tab for songs that have MASTER+ difficulty.
After the new song selection UI update on 3/19/18, all songs from the limited and event tab are unified with the regular song list, while MASTER+ tab is still a separate mode that can be switched during LIVE mode song selection.

Certain songs such as STARLIGHT MASTER Solos, the majority of ANIMATION PROJECT songs, rearranges and remixes, and most cover songs are available for purchase at the Sound Booth room item, which can be accessed in the room mode. Each song in the Sound Booth costs 5000 Money.

Three songs, all from the anime series, were exclusively available through download codes, such as Shine!!, which was available through the purchase of THE IDOLM@STER CINDERELLA GIRLS ANIMATION PROJECT 2nd Season 01 Shine!!. However, these songs were later made available to all players and since then this practice has been discontinued.

Songs that require chain unlocking with reading Story Commus and playing task song are now lifted as of the 27th April 2022 update; by just reading a respective story commu for a song, the song can be unlocked immediately, dropping the prerequisites of playing previous story commu song and PLv restrictions (especially those at PLv50 and higher).

Some songs such as Gokigen Party Night, Take me☆Take you, and Yes! Party Time!! can be toggled to their event or alternate versions before the LIVE starts.

Each song has its own MV Mode, unlockable by clearing it on any difficulty at least once. Rearranges, remixes, and certain cover songs' MV Modes are available on 2D versions only.

The songs that appear in-game, sorted by the series appearance order of songs, are as follows.
The song list order below reflects the new song selection UI's default order.

Onegai! Cinderella has its solo versions that are made available with voiced SR/SSR cards obtained from gacha pulls. For details on requirements and the list of eligible cards for Onegai! Cinderella solos, click here.

The following song list below has the Utaiwake feature in the MV mode, which ables the players to mix and match vocal parts for Utaiwake-eligible songs.
Utaiwake versions are accessible by turning on the "Utaiwake" button before the MV starts. The idols that are exclusive to the Utaiwake versions of the songs (and not the original versions; Onegai! Cinderella is an exception) are italicized to differentiate from the songs' original members.

Events allow players to obtain limited cards, trophies, and other rewards like trainer tickets and Star Jewels. Events usually last from six up to ten days.

For Live Groove and Token events, there are usually a points-based award and a ranking award card, the latter of which is awarded to players who do well in game-wide rankings (usually the top ranking 100,000 players). As of May 2020, tiers have now been extended to 200,000, which allows more people to receive the ranking SR, and as a result, both of the reward idols had become ranking award cards, meaning that players that rank higher will receive both cards. Besides that, their total stats are a bit equally high to each other. Currently, players can now get the first copies of ranking SR cards at 10,000 points for the first featured idol and 15,000 for the second one.

Every year, a voting event is held for the Cinderella Girls series. Click one of the two links below for more information:

This mode allows you to play with four other players. Up to five players play a song together and gain an amount of Star Emblems depending on how well they do individually (affected by rarity, stats, card skill level, potentials, and type attribute), which can be exchanged for previous event idols, room items, consumables, star jewels, memory keys, etc. These rewards reset monthly.

The total score does not only include the song score but also takes the idol's skill, combo length, and other factors into consideration. Players can set 4 different units pertaining to each song attribute (Cute, Cool, Passion, and All Types).
In each unit, there are five different roles that give different stat bonuses:

When put into a match, the game will randomly pick what role you will represent and the idol you picked to represent that role will be used. Here, players can also set and show stickers that greet, communicate with, and say goodbye to players before and after the match. During events, players can either gain Live Groove/Token event points, Caravan medals, attendance boosting items, or Susume Tickets from clearing lives. Players who don't have unlockable songs (such as Story Commu Solos) can also get to play these songs randomly.

Live Party mode used to be called "Co-Op Live" while in beta testing. This mode was also originally a bi-monthly event until the 2017-08-12 Live Party event before its event schedule slot was replaced by Susume! Cinderella Road.

The gacha is used to scout for new idols and to obtain cards using star jewels and friendship points as currency. All rarities of cards unlock memorial stories and idol episodes once a card is changed into its "+" (awakened) form. SSR cards unlock special outfits that can be viewed through the 3D mode in lives.

The Platinum Gacha allows players to pull for Rare, Super Rare, and Super Super Rare cards using Star Jewels as currency. It costs 250 star jewels for 1 roll and 2,500 star jewels for 10 rolls. Players can also roll once per day with 60 paid jewels. In a 10-roll gacha, the tenth card in the roll is a guaranteed SR card. All cards featured and in the gacha are permanent. A new Platinum Gacha appears three times a month usually featuring at least one new permanent SSR card and an SR card with the featured cards having a higher appearance rate than other cards in the gacha. All permanent Platinum Gacha cards are also available to roll for in Limited, Cinderella Festival, and Type Select Gacha, with an exception for Memorial Gacha.

Limited Gacha is a type of Platinum Gacha that happens at the beginning of each month usually revolving around a special theme. The featured cards are two limited SSRs, one permanent SR, and one limited SR. Starting from "SUN 3 Summer Gacha" limited gacha (July 31st, 2019) onwards, the featured limited SSRs have been increased to three, but at the same time has stopped featuring new permanent SR in a limited pool. Limited cards are not available in any other Platinum, Cinderella Festival, or Limited Gacha but their own. Some of the earlier Limited Gacha reappeared at the end of every month there isn't a Cinderella Festival Gacha.

Starting on January 15th, 2021, this special type of Platinum Gacha is much like the Cinderella Festival Blanc Gacha, where the SSR card appearance rate is doubled from 3.0% to 6.0% and features Cinfes-exclusive SSR cards. This time, the Cinderella Festival Noir Gacha happens after that month's first regular Platinum Gacha and has its own separate pool of Cinfes-exclusive SSR cards. Cinfes Blanc cards won't appear in this gacha.

This gacha happens for three consecutive days every month (one day per attribute), formerly after that month's first regular Platinum Gacha until the introduction of Cinderella Festival Noir where this gacha now appears after it. The cards a player is able to scout for are limited to one attribute (Cute, Cool, or Passion). Unlike past Type Select Gacha, all rarities are affected by the attribute constraint, not just SSR cards. Starting in April 2020, the Type Select Gacha is replaced with Theme Gacha. Instead of being limited by attributes, Theme Gacha is limited to a certain theme regardless of attributes. Only cards that fit that theme can be scouted. As of September 2020, Limited cards from the Memorial Gacha are included as well. Starting in March 2022, a new type of gacha appears - Limited Skill Pick-Up Gacha. In this gacha, only limited-time idols with specific skills (ex. Alternate, Combo Boost, and Life Recovery) will show up.


The player can also spend 2,500 paid jewels on a special premium gacha for at least one guaranteed SSR idol with a premium cut (one day per attribute).

Each pull from Platinum, Limited, Type Select, or Cinderella Festival Gacha rewards players one Star Shine Scout. After 300 Star Shines (equivalent to 300 total rolls), players can pick up one of the idols that are featured in Platinum/Limited/Type Select/CinFes gachas, alongside other random idols (in the case of Platinum, Limited, or Reprint Limited gachas). After the ongoing gacha ends, any left over Star Shines will be converted into Star Pieces.

There are 190 playable idols, both in the 3D and Puchi 2D versions of the LIVE modes, as well as in Business mode.

The following below is the list of units that appear in group songs, mainly appearing in event-original songs.

Costumes can be obtained in several ways: obtaining SSR cards in the platinum gacha, partaking in a few events (Election and New Year), and purchasing them in the dress shops (DLC). To see a full list of the costumes available in the game, click here.