It was released on October 6, 2021 and is available for free download on the Google Play Store (Android) and the App Store (iOS) in Japan. It was the final mobile game to be released during the 2nd Vision era.

THE IDOLM@STER SideM GROWING STARS features enhanced standard rhythm gameplay with music full of exhilaration and speed. In addition to new animations (similar to Cinderella Girls Starlight Stage's 2D Live Shows), some of the songs have a Singing Part function, in which players can select the performer by team building. Some songs does have a 3D live version of them.

The difficulty level of the songs can be selected from 4 levels. From lowest to highest, the levels are named Easy, Normal, Hard, and Expert. Each Live Show has a base cost of 30 ST (stamina). 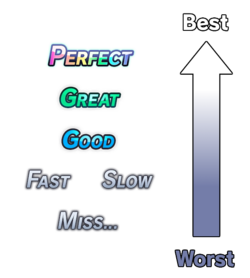 The five possible judgments in the game, sorted from best to worst.

In a Live performance, the player must tap notes to the rhythm of the song, which can range from those that can simply be tapped, flicked in a certain direction, held down, and slided in the direction of the note. When tapped or flicked, the player will get a Perfect, Great, Good, Fast/Slow, or Miss..., based on the accuracy of the tap or flick. The current combo will increase by 1 for each Perfect/Great/Good, and getting a Fast/Slow or Miss... will reset the current combo to 0 and decrease the unit's life bar accordingly.

If the life bar reaches 0, the song is failed, and the player is asked if they want to continue using 10 Star Gems. Additionally, if the player does not do anything in a song and fails it by getting only Misses..., they will be asked if they wish to restart the song, or, if they cleared it with a score rank of A at least once, play the Live Show automatically. Both of these options do not consume ST, but can only be done once in one Live Show.

To clear a song, the player must not let the life bar decrease to 0. If a song is cleared with Perfects, Greats, and/or Goods (e.g. not getting a Fast/Slow or Miss...), it will result in a Full Combo. If it is cleared with only Perfects, it will be an All Perfect.

Also present in the game is Auto Live Shows, which allow the player to let the game play a song for them. To unlock Auto Live Shows for each song and its respective difficulty level, the player must achieve a score rank of A or above. During an Auto Live Show, each time a note is tapped, the judgment will say Auto, and the amount of points gained this way is the same for Goods in regular Live Shows.

The results screen after an Auto Live Show.

If an Auto Live Show is cleared, the player is not eligible for score and combo rewards, but clear rewards can still be received. If the score exceeds the player's high score, it will also not save. Additionally, the results screen does not show the max combo or the number of Perfects/Greats/Goods/Fasts/Slows/Misses obtained during the Auto Live Show.

The game uses Live2D for character animations in commus, the home screen, and other things. Incorporating a new expression method that makes the graphics move vividly, the game tends to deliver the movements and facial expressions of the idols in order to convey their individuality.

The fully-voiced story depicts the bond and growth of idols and producers. It also features Individual idol episodes and episode zero that tells the reason why they became idols. The idol units will have brand-new stage costumes and logos in the game. Players can also interact with the idols via in-game social media that is similar to real-life WhatsApp.

Players can use 20 stamina for Oshigoto (Work). The player can select Physical, Intelligence, Mental, or All work; upon selecting, a random idol from that type (or any type from All) appears, and the player gains EXP (experience), Items, etc. Occasionally, a short communication with the idol can appear.

The gacha is used to scout for new idols and to obtain cards, known in-game as idol photos, using star gems as currency. SSR idol photos unlock special outfits that can be viewed through in Live Shows.

Costumes can be obtained in several ways: drop rewards, the platinum & medal gacha, event point & ranking rewards, through the event item exchange center, and the costume shop (DLC). To see a full list of the costumes available in the game, click here.

Just like in THE iDOLM@STER Million Live! Theater Days, some costumes in the game have "Another" (Japanese: アナザー, Anazaa) version, which are recolors of the original costume. Costumes that are rare drops and some DLC costumes do not have an another version.