Yayo (Japanese: やよ, Yayo) is a Puchidol in the Puchimasu! series and is based on 765 Production idol Yayoi Takatsuki. She is voiced by Mayako Nigo.

A curious Puchidol who reacts to the sound of money being dropped. Her hair puffs out during cold weather and she grows a bamboo shoot in the spring.

Yayo's first appearance was in Season 1 Episode 20. Yayo bit the coin dropped by Takane, and then Takane fetched Yayo away with her. 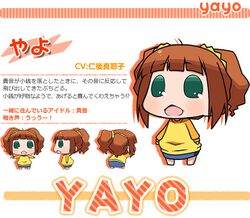 Takane found Yayo around the same time as the first puchidols, but did not reveal them to the rest of the Project 765 staff until three months later. She continues to live with Takane, but does visit the office (1x51) and roam free quite often (1x72). Like Yayoi, she is an excellent swimmer (1x47, 1x50, 2x21) and fisher (2x56). However, her most remarkable ability is her hearing, and she will dash at great speed on all fours to catch a coin in her mouth after its first bounce (1x21, 1x62), and is also a good way to rouse her from a nap (2x44).

Yayo appears as an accessory in this game. She is available by buying the entirety of Catalog 09 DLC. She raises the Dance stat and can be worn on the Head.